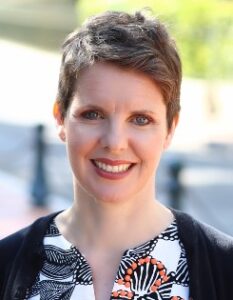 Caitríona Palmer is the author of two bestselling books, the memoir, An Affair with my Mother: A Story of Adoption, Secrecy and Love (Penguin, 2016) and Climate Justice (Bloomsbury, 2018), co-written with former President of Ireland, Mary Robinson. A human rights investigator, advocate, journalist, and author, Caitríona has drawn attention to the plight of people overlooked and marginalized through her work with survivors of the Srebrenica massacre, survivors of historical abuse in Ireland and in documenting the effects of climate change. An adoptee, Caitríona is a frequent commentator on national and international media on the legacy of secrecy and shame generated by Ireland’s closed adoption system. Caitríona is currently a Senior Consultant on Climate at the World Bank and formerly Deputy-Director, Physicians for Human Rights (USA, Bosnia); Special Assistant, Office of Prosecutor at the International Criminal Tribunal for the Former Yugoslavia and a correspondent for the Irish Times (Iran) and the Irish Independent (USA).A native of Dublin, Caitríona graduated from University College Dublin with a BA in History and Politics ‘93 and holds an MA in International Relations from Boston College ’97. She is the recipient of a Fulbright award, a KPMG John F. Kennedy Scholar award and was the 2017 Ireland Fund Writer in Residence at the Princess Grace Irish Library in Monaco. She lives in Washington, DC with her husband, Dan, and three children.